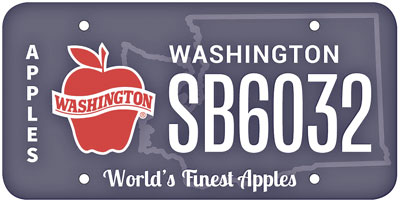 The proposed license plate, which would feature the Washington apple logo, would benefit the industry and a scholarship fund.
Image courtesy of Sen. Brad Hawkins

This new plate, which would display the Washington apple logo, recognizes the state’s thriving apple industry, the growers and shippers who produce and pack the world famous apples and the tree fruit community. The money garnered from this license plate would provide scholarship funding to the tree fruit industry’s official charity, the Washington Apple Education Foundation, which provides financial support, professional employment preparedness training and mentorship to students with ties to the apple industry pursuing a higher education, according to the pre-filed bill. The 2020 legislative session, which begins Jan. 13, will discuss the bill introducing this new plate.

“I’m a big supporter of Washington apples and believe this bill will bring awareness to the industry and help raise money for local scholarships,” Hawkins noted on his website. “The Washington Apple Commission and Washington Apple Education Foundation do great work, so I am excited to partner with them on what should certainly be a well-supported bill. I don’t expect controversy but passing anything in a short session is a challenge.”

The Washington Apple Commission will contribute $6,300 in start-up costs. The state’s Department of Licensing requires a collection of signatures showing at least 3,500 drivers intend to buy the apple license plates. The total cost of the plates will vary depending on the design and licensing fees required for someone’s vehicle. Most of Washington’s specialty plates range in cost from about $60 to $75. The Washington Apple Commission is currently collecting signatures.

For more information, and to add a signature in support, the apple commission developed a website at www.ipetitions.com/petition/washington-apples-license-plate.