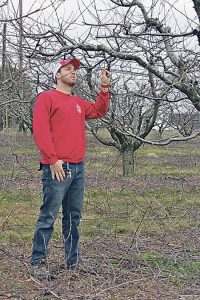 by Hope Holland
“Keep cold, young orchard. Good-bye and keep cold. Dread 50 above more than 50 below.” Those words by eminent poet Robert Frost are a fitting start to this article about what is happening in Maryland in this spring of 2017.
In Maryland the television news stations have been filled with dire warnings about what is happening to the cherry trees in Washington, D.C. after a February filled with welcomed warmth that morphed miserably into a below freezing spell of 10 days in March. The National Cherry Blossom Festival is a spring celebration in Washington, D.C., commemorating the March 27, 1912 gift of some 2000 cherry trees from Japan and it attracts visitors from all over the world and a lot of money for the D.C. area.
However those trees do not produce edible fruit and the fruit farmers in Maryland are taking the same hit that Washington’s cherry trees have had to deal with.
Robert Black who, with his sister Patricia Black co-owns the Catoctin Mountain Orchard in Thurmont, MD reports that his many of the apricots are lost at this time, a victim of the (sad to say) frequently predictable Maryland weather. He says, “The apricots are only a sideline for me, not something that I consider a main crop on this farm. I figure if I get a full crop in one year out of five and some partial crops in between I am doing well with them because of the Maryland weather.”
He went on to say wryly, “I don’t know why I am surprised. Last year we had March in April.”
Maryland is often unkind to those who grow fruit that depends on being welcomed by milder temperatures as the sun stays longer in the sky. Unlike the old couplet, March is perfectly capable of coming in like a lamb and leaving in a tempest of freezing weather and blasts of snow; Maryland is not unused to Easter snowstorms. But it is not the March weather that is blamed by either Robert Black or by Tyler Butler, a third generation fruit farmer in Germantown, MD. March is doing what it should do, they say. February let them down with its constant warm temperatures at night and often almost balmy (by February standards) temperatures during the day.
Maryland is not the only state to be hit hard by this weather. South Carolina and even Georgia took a serious hit on their peach and blackberry crops this year. Robert Black said he had just received an email from the Maryland Department of Agriculture saying it had been advised by the South Carolina Department of Agriculture that the packing houses for peaches would be closed this year.
Tyler Butler whose Butler Orchards is a very large pick-your-own farm that is not only 40 miles south of Thurmont but also not situated in the Catoctin Mountain range has not taken quite the hit that his northern neighbor has.
“We are mostly safe this year, if things don’t get any worse weather-wise,” he says. “The blueberries took a bit of a hit but the cherries, apples and strawberries only show minimal damage.”
This is considered good news, especially since his grandfather went into business with a full planting of peach trees 30 years ago and lost all of their crops to weather for six years in a row. At that time the peach trees were taken down and replaced by apple trees and then strawberries and things have been moving right along in a widening circle of plantings of different fruits, flowers, berries and vegetables ever since.
A last phone call to Robert Black produced the news that, “At this time we still have peaches but the plums are questionable.”
Since the weather moved within the last 48 hours from a night time low of under 20 degrees to a daytime high of 74 degrees it seems wise to preface any predictions with the guarded phrase “at this time” if you are watching your crops this early in the year in Maryland in this spring of 2017.