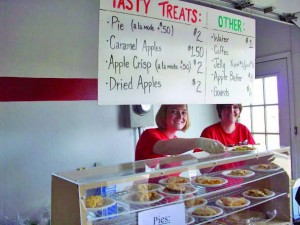 by Kelly Gates
When the Schneiders planted their first apple trees on their Lacona, Iowa property in 1983, Mother Nature had a surprise for them. She decided she wasn’t going to provide much rainfall and the growers lost nearly three fourths of their crop to drought.
They replanted the following year and had a long run of weather-free woes. But that only lasted until torrential rains during the last three years drowned much of their orchard, forcing the family to replant yet again.
According to Jane Schneider, co-owner of Schneider’s Orchard, water — or lack thereof — has been their biggest issue over the years. But it hasn’t been the only one.
“We’ve done everything to try to keep the orchard watered enough, including watering each of our 300 trees using five gallon buckets of water that first year,” she said. “One year, we even rented a huge hose, bigger than the hoses on fire trucks, and blasted a ton of water from our pond out over the trees.”
While Jane and her husband Arnold were able to transport the buckets out into the orchard in a wagon, each one had to be dumped at the base of every tree by hand.
It took hours and hours to complete the irrigation process using this method. And the arduous task had to be repeated every week or so that first year, said Schneider.
“It was so ridiculously tedious that all we could do was laugh,” she said. “But when we rented the water hose, it was even more interesting because it took me and my husband both just to manage the thing and even then, we could hardly move it from tree to tree. When we were done at the end of the day, we were so sore that we were nearly crawling back to the house.”
Over time, the trees began to grow steadily and the weather cooperated, enabling the family to take a break from their watering escapades. Jane and Arnold sent their kids off to college one-by-one and helped pay for a portion of their schooling using profits from the orchard.
Then, after a long period of peace, unsavory conditions struck again.
“During the past three years, we had a number of torrential downpours that effectively drowned many of our trees,” explained Schneider. “We would see a limb or two die only to be followed by the whole tree until we needed to pull it out. It was so frustrating, especially since we couldn’t do anything about it. And then there was last year’s frost.”
A late frost in the spring of 2012 wiped out many fruit growers’ crops throughout the Midwest. Schneider’s Orchard was one of them.
They were able to salvage some apples. The rest were scrapped and the family tried again this year.
In an effort to learn even more about weathering such severe storms — and growing in general —the owners attended a farm tour. During a visit to a university growing seminar in Traverse City, MI, the Schneiders witnessed new techniques growers there were trying in order to circumvent extreme rainy seasons.
“Some of the growers were attempting to plant in mounds of soil rather than underground,” said Schneider. “I’m not sure if it worked for them, but it was definitely an interesting concept.”
Despite the continual setbacks, the Schneiders never gave up. Instead, they expanded their market base by getting involved in an annual farm crawl. They also focused their attention on selling their u-pick and pre-picked apples directly to customers at their orchard as well as to wholesale customers.
“The Farm Crawl we’ve done for several years now, and has been a big boost for us, with over 1,500 people coming out last year alone.”
There are currently six area farms involved with the crawl. Each one is slightly different from the next, offering everything from apples and pumpkins to pottery and other arts and crafts.
At Schneider’s Orchard, crawl participants can pick their own Jonathan, red delicious, golden delicious, criterion, gala, honeycrisp and fuji apples. Or, they can buy pre-picked along with apple pies, dried apple chips, caramel apples and other tasty treats prepared by Jane, her daughter and daughters-in-law.
The entire family works at the orchard during the yearly event. They help with tractor-drawn wagon rides, setting up wooden cutouts for fun photo opportunities and helping a local FFA group with games for the kids.
While these growers have endured more than most, their spirits remain high and they even recognize one benefit from their banes.
“Having to replant after the flooding allowed us to put in honeycrisps, galas and fujis which are pretty popular, but we didn’t already have in the orchard,” said Schneider. “We got through it all okay, but we’re hoping we are hoping for better luck with the weather in the future.”