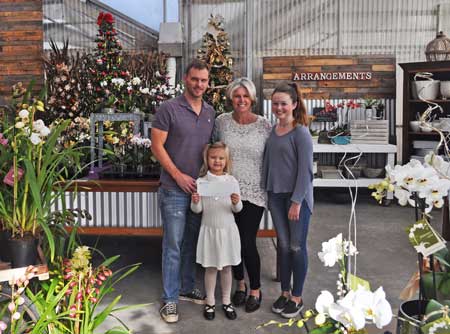 Proceeds from Pre-Holiday Weekend Benefit Food Assistance in Program for Hungry
Westerlay Orchids orchestrated a last-minute fundraiser to help the FOOD Share, Ventura County’s Food Bank, which has been instrumental in feeding tens of thousands of people displaced by the Thomas Fire All of the proceeds from retail orchid sales at the Carpinteria nursery from Dec. 21 to 23 went to the food bank. The $11,000 boost to FOOD Share will help it continue its critical operations when demand for food assistance has spiked in the aftermath of California’s largest-ever recorded wildfire.
Westerlay (www.westerlayorchids.com) is located in Carpinteria where the flames marched down the mountainside toward more populated coastal areas but were heroically turned back before threatening the community. The orchid growing team was tremendously grateful that the fire was contained away from the facility and many homes, but realized that thousands of people on the South Coast were not so fortunate.
“When you’re in the middle of a tragedy of this scale, you can feel helpless,” said Toine Overgaag, Owner and President of Westerlay Orchids. “We wanted desperately during those weeks to find a way to help, so we decided to turn proceeds from our sales over to the food bank. The people at the food bank know how to leverage donations to have the greatest impact for the community.”
FOOD Share has been deeply involved since the fire erupted on Dec. 4 and consumed a vast stretch of land between Santa Paula and Ventura in its earliest stages. Entire neighborhoods were scorched, and by the end of the devastation, over 100,000 Ventura and Santa Barbara county residents had been displaced from their homes. The food bank has had its resources stretched and has been soliciting both food and monetary donations to keep up with the increased demand for its services.
“We couldn’t do this without the support of generous businesses such as Westerlay,” explained Monica White, president and CEO of FOOD Share. “The need to feed our hungry neighbors is not over, nor will it end when the firefighters head back home. Westerlay’s generous donation is is a wonderful demonstration of providing hope and help to those affected by the Thomas Fire.”
“There is such a sense of community at Westerlay Orchids and throughout the area that people are looking for a way to help,” said Westerlay sales manager Katherine Griego. “Our customers were happy to be able to participate in our fundraiser by purchasing our beautiful orchids knowing the proceeds were being donated to such a good cause.”
No stranger to philanthropy, Westerlay Orchids regularly holds fundraising drives for local nonprofit organizations and community service groups. Local schools and the Santa Barbara Breast Cancer Resource Center have been among the beneficiaries of other community-focused outreach undertaken by Westerlay.