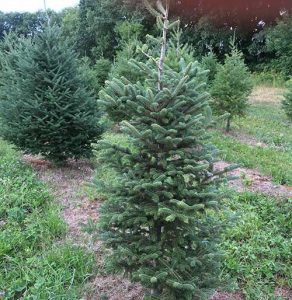 by Daniel Crofts
Drought. Unseasonable heat. Unseasonable cold. Rapid temperature changes. These are some of the troubling weather patterns with which Western New York farmers have been forced to contend over the past couple years.
Drought conditions in 2016 have made many plants and trees more vulnerable, which in turn makes them easy prey for pests such as the needle midge, white pine weevils, and Cooley spruce gall adelgid.
The New York State Integrated Pest Management (NYS IPM) Program held a “Conifer Pest Management Program & Tour” in partnership with the All Western Evergreen Nursery and Christmas Tree Farm (AWENCTF) in Springwater, NY, to educate and address the concerns of tree farmers, nursery growers, landscapers and arborists from all over Western New York.
AWENCTF co-proprietor Jerrianne Scheiderich said she considers her farm very lucky, all things considered. The area in which she lives has enjoyed more rainfall than much of drought-afflicted Western New York.
“It’s been dry,” Scheiderich said, “but when I go to other parts of the state I see plantations that are a lot worse off.”
Nevertheless, AWENCTF has not enjoyed total immunity to pest problems.
For example, some of the farm’s Douglas-firs showed symptoms of needle midge, which generally looks no bigger than the width of a needle and appears as a kink in the needle, with yellowing tissue around it.
According to Brian Eshenaur of NYS IPM, who helped coordinate the Pest Management Program, the needle midge can easily go unnoticed because “you don’t really see it every year.”
“The past two years, this has been more of an issue,” Eshenaur said.
When and how you spray makes a difference
Spraying is a common solution for many pests, but farmers often wonder how much and how often to spray. The answer to this question will vary depending on who one asks.
“(For needlecast diseases on Douglas-fir), we have some people out in Washington State who spray just once,” Eshenaur said, “and they say they think we can do the same out here. At the same time we have some growers in Pennsylvania that say they need to spray five times. So we thought, ‘Well, let’s see.’”
Since 2014, Eshenaur has been experimenting with different spray applications and frequencies at AWENCTF.
“We had a control branch that didn’t receive any spray,” Eshenaur said. “Somewhere around 90 percent of the needles had an infection.”
Another branch was sprayed fairly early, when there was a small amount of green and most of the needles were “still tight in the bud.”
“We’re still at about 60 percent of the needles that were infected from that treatment. But then we go to a sprig I got thoroughly coated on that first week when the new growth was fully out, and we had zero. We couldn’t find any (infection) there. I continued that out, and there was no disease after that.”
Eshenaur’s conclusion was that with the right amount of spraying at the right time, infections can be kept at a minimum or, in the best of circumstances, eliminated.
“But what if…?”
Life on the farm is not always that easy. There are times when people need to be away from their farms, or cannot go outside due to inclement weather.
So if one were unable to spray during that first week, would spraying the second week make a difference?
Eshenaur has modified the experiment to address this question. This year, he is skipping certain sprigs during week one and waiting until the following week. The results of this experiment will be seen when the disease finishes its development next spring.
Traps
Senior Cornell Cooperative Extension Associate Elizabeth Lamb, also with NYS IPM, gave a presentation at the end of the evening about traps designed to help with scouting and monitoring various pests.
One such trap is designed for the white pine weevil. It is made to resemble a tree and includes a lure with turpentine in it, making it smell like damaged bark.
Lamb recommends keeping such contraptions at a distance from the crops one wants to protect, as it will attract a number of pests without trapping them all.
“The idea is not to trap them all out,” Lamb said. “The idea is to know when the first one arrives, and so know when to spray. Because adult insects don’t just lay eggs and die; they stick around.”
Other traps were demonstrated also, such as yellow “sticky cards” meant to attract smaller insects. Designs for others, such as the bagworm trap and the needle midge trap, were included in a set of handouts.
Lamb cautions people not to see these traps as cure-alls.
“These are potential tools,” Lamb said. “But we don’t have all the information yet to say, ‘This is exactly how to work it.’ We like it when people try things out and then tell us what works.”
Room for improvement
Lamb spoke of an effort currently underway to get a tool known as growing degree days (GDD) into NEWA, NYS IPM’s weather system. GDD is a way of measuring how much heat has accumulated over a certain time period.
“It’s usually the average temperature minus whatever the base is for when things develop,” Lamb said. “If you calculated that every day and added it up, you would start accumulating this or that amount of heat.”
This is important, because insects tend to develop faster in warmer temperatures.
“By knowing how many growing degree days have accumulated, we can estimate what stage of development an insect might be in and if it is the correct time to apply an insecticide.  Putting them on at the wrong time is a waste of money, so growers need tools to figure out the best time to apply.”
Anyone interested in applying GDD to their location can do so by visiting the NEWA website: http://tinyurl.com/jufoj4s .