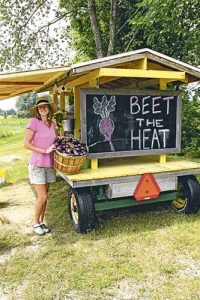 by Laura Rodley
Perfectly uniform purple peppers, beets, swiss chard, eggplant, broccoli, brussel sprouts, green kale, lettuce, specialty greens, cabbage, broccoli, cucumbers, a variety of tomatoes and basil. All these vegetables and herbs are grown and sold by Kate Pike, the owner of White Goose Gardens.
For three years, Pike rented three acres from Holiday Brook Farm LLC in Dalton, MA where she raises her vegetables organically. Pike supplies the Holiday Brook Farm farmstore with organic produce and supplies the community by selling veggies to customers through CSAs and selling to local stores, restaurants and farmers markets.
She also held an essay contest this past spring; the winner received a CSA consisting of enough vegetables to feed four to six people. Pike also sells produce at her own farmstand and at weekend farmers markets.
Pike attended SUNY Cobleskill in New York for Aquaculture. “After school, I did an internship on a farm (Cabbage Hill Farm in Westchester, NY). I was fortunate,” she said. From there, she started her own business.
She has two greenhouses. One is a high tunnel greenhouse she uses to grow tomatoes, including Estiva, heirloom varieties of Valencia, stalwart Brandywine, and Red Zebra. Pike will also grow plants in the spring and fall. The second greenhouse is used for germination and seedlings.
“I like being outside, working with my hands, growing plants from start to finish, seeing my hard work ending up served on a plate and bought by someone else so they can enjoy it,” said Pike.
“It’s a lot of long hours, long days [and] hard work with keeping the weeds at bay — keeping the plants happy,” she said. “In terms of running my own business, some days I’m on the phone handling orders, other days it’s working on advertising and finding the best way to do everything. It’s all the time. People text me at 10 p.m. because they ran out of something and want it the next day. When you run your own business, it never turns off.” She has proved herself an essential part of the community, offering quality produce other businesses have learned to rely on.
She is a great fan of Holiday Brook Farm’s compost. She uses their compost, kelp and chicken manure, which are Organic Materials Review Institute (OMRI) listed fertilizers, to enrich her gardens. She buys the chicken manure. She grows her produce organically, but is not certified organic. She has researched organic and alternative pest fighting products extensively.
“I try not to use organic sprays. You can buy organic sprays to combat powdery mildew. Instead, I mixed a batch of baking soda and water,” she said. “At the end of the day, you have to make a profit,” so she weighs the pros and cons of each type of treatment.
Old white bed sheets, the kind placed over crops when there’s a forecast of imminent frost, can be placed over crops to deter flea beetles which attack leafy arugula and Bok choy. “In theory, it works better than in real life,” she said. Quite simply, she also pinches and squishes bugs to deter them.
She stands behind her produce and is in the front line, selling it at the markets and her farmstand. “At the end of the day, my customers know me. I promote getting to know your farmer and asking them what they’re concerned about. I use no GMO seeds. I’m an open book in terms of how I farm.”
“A farmer told me every day’s a different day,” said Pike.
What is her greatest triumph? “My greatest triumph is still running my own business successfully after three years, supporting myself — the same for any small business.”