Why does my substrate pH drop when I use a basic fertilizer? 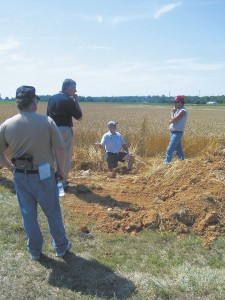 by Steve Wagner
“A lot of growers, particularly in the southeast, are using basic fertilizers because we don’t have much alkalinity in the water,” says Brian Whipker of North Carolina State University, explaining how this topic even came about. The floriculture research and extension specialist says that people still, at some point, have seen the pH drop even with the basic use of fertilizer.” With his webinar underway, Whipker touched on Managing pH Drift. Looking at substrate components, if you are thinking of making the pH drift higher, Coir does that, largely because it is more neutral, whereas peat and bark (more acidic) would make the pH go down. It’s the same thing with limestone. With too much limestone, the pH rises, and goes down with too little. Alkalinity? “If you start getting above 200 ppm (parts per million) bicarbonate, you will see that pH creeping up over time, which is often the case in Midwest and the Great Plains. Little or no alkalinity makes you susceptible to pH drop. Of course, there are the basic fertilizers that increase pH while acidic fertilizers will make it go down.”
Another thing to consider looking at pH Drift is the type of water you have, and the type of lime charge. In both cases, if you are using a lime charge, it will stabilize the substrate base. But if you are using alkaline water, you will see that substrate is going to go up. There is also the effect of fertilizer uptake. When a plant takes up an ammoniacal type fertilizer, you are seeing a pH drift down, whereas with a nitrate type fertilizer you see the pH drift up. “The reason for that,” according to Whipker, is that when a plant is taking up fertilizer it wants to remain balanced or neutral. If it takes up the nitrate fertilizer, it will give off a negative, a –OH.” Dr. Paul Nelson at NC State, along with some of his graduate assistants, had studied this and his findings are on schedule to be published this year. The foregoing is a sort of sneak peek at that.
“An interesting thing that they found in this research,’ notes Whipker, “is that in the case of all three fertilizers – basic, neutral, and acidic – over time dropped. Why is that the case? You would think that a basic fertilizer would cause the pH to go up, but they did not find that in the numerous trials that they were doing.” Slides clearly illustrated that pH went to low which was reflected in the progressive appearance of standard bronzing in marigolds, and even a necrosis going on in zinnias after bronzing. On other plants, a purplish-black discoloration was found on lower leaves. “Thinking about this when you start looking at fertilizers, and the chemical effect of that fertilizer,” says Whipker, “if you mix up some fertilizers that were 200 ppm, an acidic and a basic, what would be the case of the solution pH? We measured some and the pH was about 3.8 in that concentrate. What might the pH be under the basic conditions? The pH of the basic, in this case 13-2-13 Cal-Mag, was actually more acidic than a 20-10-20. When you look at the potential acidity, the 20-10-20 is about 400 pounds of potential acidity whereas 13-2-13 is likely around 400 pounds of basicity.”
The take-home here is that you should try to match the EC level with the plant’s requirements. Monitoring the substrate pH and EC assures that values are on target.
Joshua Henry is a horticultural graduate student at NC State University and he picked up the conversation with Revising Your Phosphorous Fertilizer Strategy. The Phosphorous fertilizer strategy has been undergoing change for the past several years. Common fertilizers such as 20-20-20 and 20-10-20 have been found to apply far too much phosphorous. Depending upon the crop, 5-10 ppm phosphorous is sufficient for healthy compact plants. NC State is conducting research response using various rates of phosphorous. Trials on Alternanthera and Iresine were used for creating a visual response curve. “These plants exhibit high initial growth with additional phosphorous. Growth begins to plateau with this addition,” Henry says, “after about 5-10ppm. That growth will eventually start to decrease, though, due to toxic levels of phosphorous that are not that different from levels in common fertilizers.”
Nelson has done additional research on phosphorous and compactness, specifically with bedding crop plug production. “This kind of strategy will work for short term crops such as plugs,” says Henry, “giving them no phosphorous. But, that was not the case for long term crops because all plants need phosphorous and if plants don’t get enough of it, they will start to develop deficiency symptoms.” The main phosphorous deficiency symptom, Henry noted with poinsettias, is red coloration of the lower leaves. Reddening generally begins on the lower portion of the plant because phosphorous is a noble element. As it becomes deficient, phosphorous will reallocate from lower growth to newer growth, which is why younger leaves remain green. “It is also important to remember that although you may be supplying adequate phosphorous to the plant, there may be other factors that are limiting the plant’s ability to uptake phosphorous such as root rot,” Henry says. Cold and wet conditions can also contribute to a plant’s diminishing health. “Although the roots may be healthy, and you may be applying enough phosphorous, if the temperature is generally under 55 degrees it will prevent the plant from being able to take up the nutrients that it needs.” Water stress should also be considered. If enough water is not present in the substrate the plant will be unable to take up enough phosphorous, thus developing the red coloration.