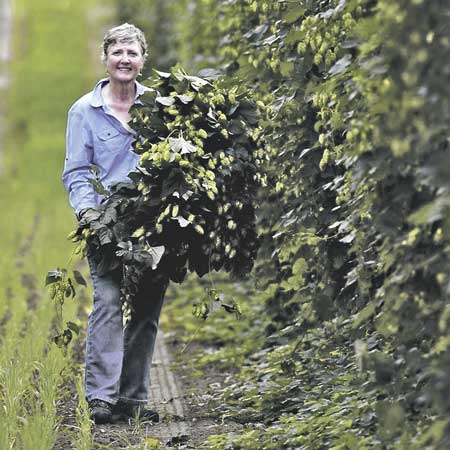 The Goschie family has been in the hops business since their beginning in Oregon’s Willamette Valley. The grandparents of the fourth-generation farming siblings planted their first crop of hops in 1904, and the family history of farming in the Valley goes back another 30 years before that.

They have 500 acres of hops and also grow around 300 acres of other crops, including grass seed, corn and wheat. In 2006 they added 150 acres of wine grapes — primarily pinot gris, with some Riesling and viognier, and three years ago, a test plot of pinot noir.

Last year, they added some test fields of Salmon Safe malting barley. Working with Walla Walla’s Mainstem Malt and Dr. Patrick Hayes, professor of barley breeding at Oregon State University’s Crop, Soils and Science Department, they selected varieties that would grow well in the moisture-rich Willamette, choosing Genie, Lyon and Full Pint. Some of the breweries they sell hops to are brewing test batches of the barley, malted through Mainstem Malt.

All of the Goschie’s crops are Salmon Safe, a certification that ensures clean watersheds for the region’s native salmon to spawn and thrive. “I started to get curious about it around 2005, 2006. I was seeing it being used in the Oregon wine industry,” said Gayle Goschie, who runs Goschie Farms with her brothers Gordon and Glenn. “When I was having a glass of wine from an Oregon wine producer, the back of those bottles would talk about how the grapes were grown and where they come from and I would always be seeing the Salmon Safe logo sticker.”

At the same time Goschie was beginning to reach out to craft brewers in the Portland area about using their hops. “It just hit home to me that it was a really wonderful way to explain to not only our potential brewer customers but to have those breweries be able to educate and reach out to their customers as to how their hops were being grown and sourced,” she said.

When they added wine grapes to the farm they continued the certification and three years ago they converted all of their crops to Salmon Safe. The farm already had an emphasis on treating the soil well and respecting nearby streams, so Goschie said there was not a lot they had to change in their practices for the certification. She noted that during some seasons over the past 12 years they’ve been certified they may have been tempted to use harsher chemicals to rid pests, but the certification kept them from that.

“It ended up actually working out much more to our benefit,” said Goschie. “We really were held to the line all those years and when that happens, as a grower and as a growing system, you’re really able to continue the balance of nature that is a part of your growing technique — so not coming in with anything harsh that could take away that balance of anything that is naturally controlling your pests.”

They also use drip irrigation to minimize water use and run off, which has the added benefit of not adding humidity, something the traditional sprinkler irrigation they previously used would. Since downy and powdery mildew, one of the biggest threats to a hops crop, love humidity, this helps reduce the problem. Other steps they take to reduce the threat of mildew include cultivating the ground between the hop rows so air can move through the plants. They also select hop varieties that come out of breeding programs with high ratings for natural protection against mildew, and use Salmon Safe approved fungicides when necessary.

The Goschies grow 10 varieties of hops, including Cascade, Centennial, Crystal, Nugget, Sterling, U.S. Tettnanger, Hallertau 102, Santia, Strata and Willamette. “The varieties that we’re growing are really pretty popular for the craft brewing industry so we’ve had pretty good luck getting them,” she said.

They primarily market directly to regional breweries — around 30, and they also sell some hops through brokers. “For myself as a farmer, I relish the fact that we’re able to grow so much of our crop and know exactly who the brewer is and even getting down to what beers our hops are going into,” said Goschie.

Some of the brewers come to the farm during harvest, which Goschie said she enjoys, since they can offer their input. In addition to the chemical analysis of the hop cones to determine exactly when they are at their peak for harvest, “the brewer and the grower will get down to the age-old time analysis of grabbing the cones in the field, rubbing them between your hands and smelling the aroma,” she said. “If the brewer is smelling the aromas to his or her liking than that could be a determining factor in harvest, which is really cool.”

Although harvest is the busiest time of year, it is Goschie’s favorite. “It’s the one time of the year where pretty much everything is focused on harvesting crop, and that’s just really cool when the entire farm and the entire staff [is involved],” she said. “We worked all year to get the crop to that point. It can be very intense because just a matter of a few days one way or the other can really affect the quality of the crop that you have in the field. And it’s not just like ‘put it on the calendar to harvest this crop this field this day’ because Mother Nature can decide to bring in a rain storm or do something to disrupt the organization.”