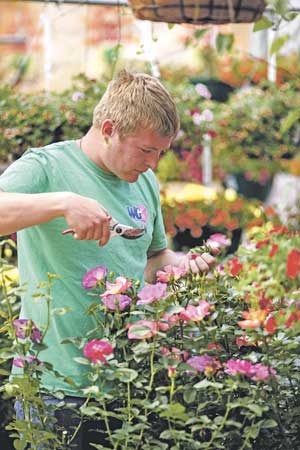 Ah, Spring Fever. That ancient malady is easily remedied at Windsor Gardener. While sipping a prizewinning beer brewed onsite at High Hops Brewery in Windsor, CO, customers can peruse the garden center gift shop and pick out houseplants. Or, they can choose garden seeds, garden décor or yard art to set up a garden once the soil warms up and even pick up beekeeping supplies. They also offer classes from fairy gardens to building a succulent/cactus garden.

“You can grab a beer, look over the seeds, and look out at the hop field,” said Zach Weakland, fourth generation grower and head brewer.

Windsor Gardener grows petunias to Shasta daisies in 16,000-square-feet of space provided by six different greenhouses. Their houseplants are also grown in their greenhouse.

In addition they sell herbs, vegetables and hop plants, but “we stay away from shrubs and trees.”

When asked how long has he been involved in the business, “My whole life,” he answered.

His parents, Pat and Amanda Weakland, opened Windsor Gardener in 2001, after garnering a decade of greenhouse expertise from owning their business, Plant-a-Scape. Pat is a third-generation grower who grew up working in his father’s greenhouse in Longmont, CO. Amanda first earned her green thumb working on her family’s farm.

In 2007, they started growing hops and added being a hops farm to their list. Currently, they grow two and a half acres of hops within a 15-acre space on their property, all available for future planting. The hops flourished and they didn’t have an immediate outlet to sell them.

“In 2010 we started a home brew shop because we had so many hops. There wasn’t a market for using whole leaf hops. In whole leaf form, they clog up [the] equipment. For the most part, commercial breweries use pelletized hops. There were a few small brewers that took our hops.”

The brewery and garden retail space are housed inside the same building. “You can come in and have a beer and look at all the plants.” said Zach.

They have 16 staff on hand. In summer, that bumps up to 25 inside the garden center and brewery. Zach’s younger sister Rachel does nonprofit fundraising events. His wife, Kati Zybko, works in the tasting room.

While not certified organic, they grow without using herbicides or pesticides. Though grateful they don’t encounter the mildew problems of the Pacific Northwest, Zach has met his nemesis. “Spider mites — they’re the devil. They’re horrible for us,” he said.

Zach is a runner. Being an athlete is an asset because it infuses him with the energy, endurance and patience befitting a head brewer and fourth generation grower. “This is a kind of life where pretty much anything is possible, depending what kind of hurdles you go over, and be creative, and how far you are willing and want to go.”