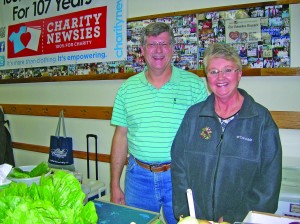 by Bill McNutt
Direct marketing of farm produce has expanded greatly over the past 25 years, as growers seek more profit through bypassing wholesalers and processors. Until recently vendors were limited to spring and summer growing seasons in the colder climates. But the last five years have seen expansion into winter farm markets held in interior locations. Recent advances in small greenhouse type construction, utilizing both low and high tunnel plastic covers, has succeeded in extending the growing season.
Aided by research at the Wooster-based OARDC and satellites, Ohio growers are now appearing at highly populated urban sites on a regular basis, selling not only such winter stored root crops as potatoes, beets, onions, cabbage, carrots and CO2 stored apples and cider, but spinach, kale and lettuce. Bill Poor of Albany, Ohio expects some of the more cold weather hardy crops to be harvested as late as February; he was still growing and harvesting in late December. After a one day seminar at the South Centers branch of OARDC, he set up four low tunnels on blue plastic mulch, two of them 106 ft. long, two at 40 ft. length. Crops were started in September, then transplanted into low tunnels in October, with the growth process helping to raise temperature as much as 40 degrees under the plastic cover.
The Poors are among 10-15 winter market vendors gathered on the first and third Saturdays, leasing the site from Charity Newsies. Cathy Krist is market manager of the Northwest Columbus, Ohio location. Within a 10 mile radius are similar markets in Clintonville and Worthington. Clintonville is definitely a winter market, located in the outside patio space of a local specialty coffee shop, protected from the elements by heavy plastic exterior covering, plus an industrial grade space heater. Krist says their venue could handle as many as 25 vendors but “it would be a tight fit,” while Worthington has over 80 vendors at various times during their summer season.
Of the 10-12 direct market sales set up at various times in the Columbus metro area, three of them are managed by Jaime Moore, including Worthington, Dublin and Bexley. She also owns and manages Wayward Seed Farm in next door Union County, concentrating on organic produce.
In Columbus proper, the municipally owned North Market has been a fixture in several different locations over the past 100 years. While the North Market is city-owned, Worthington is sponsored by the Olde Worthington Business Association, while the Clintonville Chamber of Commerce endorses their direct farmers market. All three markets are in areas with few farmers, where many vendors are up before dawn to pack produce and drive 50-60 miles to set up their table by 8 or 9 a.m.
Moore originally came from Sandusky County to Ohio State, with a background of very localized production on the family farm, and still remembers the culture shock of buying vegetables in a supermarket — a first-ever experience. Cathy Krist has the same type background, growing up on a general crop and livestock farm in Marion County then transitioning to specialty crops, along with a vegetable, egg and meat CSA operation. Conventional growing culture is utilized; the three year preparation for organic production, along with voluminous record-keeping is a hindrance rather than help. Most managers are also growers, CSA operaters, or provider to local restaurant chefs who need to understand the seasonality of production. Moore is already undertaking organic certification on newly acquired land, is happy with process, and has already developed a steady market.
Even the most dedicated customer for locally grown food will admit that California, Texas and Florida — and all other year round production sites — will continue to supply two-thirds of needed produce in this country; many will even admit that most supermarket chains are being supplied with locally grown food. While the usual definition defines local as within 50 miles, purchased two to three days from harvest, chain store distribution centers can and do send truck loads of fresh produce 500 miles within two to three days of being harvested. The largest purveyor of organic food in this country is Walmart, who are not bashful about proclaiming they sell locally-produced food. Direct sales do not mean the product is cheapest on the market, rather that it is a premium product, will be of higher quality, is more nutritious and probably will taste better.
Anecdotal evidence suggests that most direct sales customers are under 50, have been better educated about nutrition in their childhood years and as younger parents are more concerned about what their children are eating. Most of them feel more research to develop plants that grow in colder climates is needed but not through genetic modification, the quickest and easiest way to get it done.