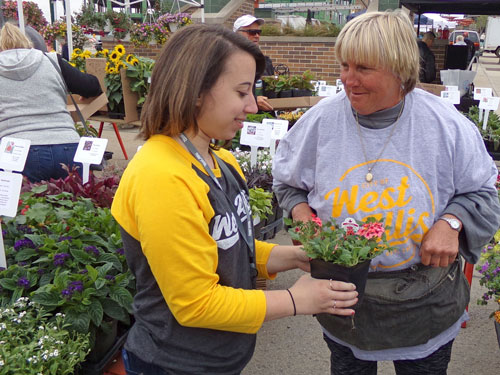 Whether it’s a birthday or an anniversary, the 100-year mark is a special reason to celebrate. That’s the case for the West Allis Farmers Market, the metropolitan Milwaukee area’s largest open-air farm market in continuous operation since 1919.

Located in southeastern Wisconsin, the traditional producer-only marketplace has provided generations of families with farm fresh produce and flowers. Originally operating from Conrad’s Point, today’s market is on a much larger corner lot just south of that first location. The move took place in 1931 when the city built 154 roofed market stalls that still provide a covered sales area for independent farmers and producers today.

As the years progressed the community grew from 13,700 to over 60,000 in 2018. The area surrounding the market has had an explosion of development the past five years, with retail as well as apartment and condominium development racing to keep pace with demand.

The market’s unique European influence is reflected in its schedule. Being open three days a week (rather than just one) from noon to six allows vendors to bring fresh-from-the-field product harvested that morning. It’s more than the story of a 100-year-old thriving marketplace, however. It’s about the farm families that have contributed to its success and how, in turn, this market has helped these same farms over the years.

According to West Allis Tourism and Event Coordinator Caitlyn White, the market begins in May with plants, flowers and early vegetables. “Mid-summer to early fall brings in our highest attendance numbers,” she said. “This year we will have special events throughout the summer to celebrate our 100th season and will roll out our new farm market logo at our July 13 Anniversary Celebration.” Also serving as market manager, White added, “One of the reasons we are so successful is that our farmers stand out among the rest. In fact, some of our farms have been with us since the very beginning.” The market is at capacity for the 2019 season with a waiting list for next year.

Homesteaded in 1869, our own family farm participated in the West Allis Market for more than 60 years. My husband’s grandparents would often tell the story of traveling to West Allis to sell strawberries and eggs and that it was that market that helped our family get through the Great Depression. Later generations would continue attending the West Allis Market selling melons, sweet corn, vegetables and cut flowers grown on our farm in Waukesha County.

One of the original West Allis Market vendors was the Robran family. Cindy (Robran) Chapman and her family work a corner double booth – prime real estate at any market. Chapman recalled going to market as a child more than 50 years ago. “I remember helping my Grandpa Robran on the farm and also selling at market,” she said. “We still bring annual flowers, herbs and vegetable plants with our own kids and grandchildren helping each week.”

Her husband Joe and son Josh were also there to help, along with daughter Jessie Stochetti. “We were here setting up by nine this morning,” said Stochetti. Chapman’s granddaughter Daisy likes to help by selling vegetables and the eggs she collects from the farm’s 100 chickens. The family attends the West Allis Market on Tuesday, Thursday and Saturday each week.

Chapman said, “We accept the Senior Farm Market and WIC vouchers, cash, check and use PayPal to process any debit and credit card purchases.”

The family also operates Cindy’s Greenhouse at their farm in East Troy, WI. The greenhouses are open from early May through mid-June, offering floral hanging baskets, bedding plants, vegetable plants and herbs. On-farm produce sales are added from July through September with sweet corn as one of their best sellers. “About 75% of our yearly sales are from the West Allis Market,” said Chapman. “The balance is from sales at the greenhouse and our produce stand at the farm.”

Each year the University of Wisconsin Extension service publishes the Wisconsin Farm Fresh Atlas, listing both on-farm sales locations and farm markets across the state. While competition increases with more and more communities adding farmers markets each year, the West Allis Farmers Market has continued to evolve while standing the test of time.