Wojnar family farm: A blend of hydroponics and traditional farming 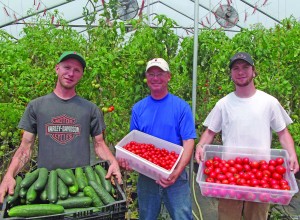 by Melody Reynolds
Growing strong, the Wojnar family farm has been taking root on an abandoned piece of land in Saunderstown, RI. The farm, once over run with weeds and trees is now plowed, planted and buzzing with activity. Two brothers, Josh and Adam, and their father Mike are the backbone of this family business.
The Wojnar family hopes to turn this old farm into a family fun spot. Hay rides, pumpkin picking and an animal petting area are all planned for the future, according to Josh.
It all began two years ago when Josh lost his job as a diesel mechanic. He and his family were sitting around to brainstorm what to do. Having a father who went to an agricultural college, the family decided to give farming a try. Josh says, “Now I cannot imagine doing anything else.”
The family started their original farm in Foster, RI and moved to Saunderstown one year ago. Josh and Adam talk about what a great family they have and how everyone helps and shares their excitement for the farm.
The hardworking family erected two large greenhouses to grow their hydroponic produce. The practice of hydroponic faming is method used to conserve water and no soil. Water is pumped from large underground tanks that were installed before the greenhouses were built. These tanks pump water which constantly moves over the roots of the plants. The water is returned to the tank and begins the process all over. “Very little water is wasted due to evaporation,” says Josh.
Hydroponic farming also requires no weeding, as there is no soil.
Instead of soil the roots take hold in two different types of material. The newly seeded plugs are started in rock wool that has many nutrients to get the sprout well on its way. Older plants are put into buckets filled with perlite. Both of these materials allow water to flow over the roots for the hydroponic process.
The family trains the plants to climb vines instead of spreading out over the ground, conserving valuable growing space inside the greenhouse. Some of their plants reach heights of 22 feet. This process of farming eliminates the need for pest control and allows the Wojnar family to grow produce throughout the New England year, not having to give way to the elements of cold, snow and ice. Large heaters keep the greenhouse producing veggies when other farmers cannot produce.
In addition to the hydroponic greenhouse, Josh says his family is also doing some traditional farming in the fields just outside the greenhouse. Neat rows of herbs and flowers cascade the newly turned dirt.
The family works 12 hour days to try and keep up with the demand of their produce. All day long customers stop in to visit the farm and pick up produce. Mike states, “As soon as I pick produce and put it in the cooler someone comes and buys it.” A small shed converted to a refrigeration unit acts as the farm store currently.
The farm offers many varieties of tomatoes, cucumbers, peppers, beans, peas along with other vegetables and will have fresh cut flowers soon. The family hopes to eventually be able to offer their customers baked goods using their own produce.