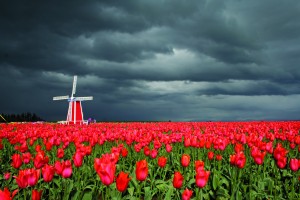 by Kelly Gates
Wooden Shoe Tulip Farm of Woodburn, OR was originally founded as a tulip-growing operation for a retailer based in Terre Haute, IN. The business owner chose to grow his tulips on the Oregon property because the climate there enabled him to access a crop much sooner than growers in Holland, giving him the advantage of having tulips earlier than the competition back in Indiana.
According to Barb Iverson, current president of Wooden Shoe Tulip Farm, her family eventually took over the fields, experimenting with several business options before settling on the diverse set of offerings the company has today.
“When the previous owner retired, my brothers bought his bulb stock and started out selling dry bulbs on the wholesale market,” Iverson said. “When the wholesale endeavor didn’t pan out the way they’d expected, we decided to sell the bulbs through mail order and at garden shows.”
While the new sales outlets brought in more profits than the wholesale market had, the company really took off when the Iverson family opted to open to the public one Easter weekend.
The fields were in full bloom. Wheelbarrows were filled with bundles of cut tulips for purchase for one dollar each. And a newspaper advertisement was placed, alerting the public of the several day open house.
“We had such a great turnout that it was literally a traffic jam here,” said Iverson. “When we saw the response, we knew we were on to something, so we continued having that event each year, adding new products and activities every year since. We also began adding more events throughout the year.”
The company added small displays of flowers in bottles and vases to showcase the different varieties of tulips it sells. A consignment shop was opened to sell cut flowers and gift items. Then, after realizing the potential to sell food on site, an eatery was opened, along with a wide array of kid- and family-friendly activities.
“We had a local Boy Scout troop here once that sold hot dogs and sausages as a fundraiser and they did so well, we figured we should sell food whenever we’re open,” noted Iverson. “Now, we serve hot dogs, burgers, deli sandwiches and all sorts of other foods, like Dutch sausages, which are probably the most popular choice here.”
Wooden Shoe Tulip Farm also built a children’s playground complete with horsie swings. Guests can participate in rubber duck races that require contestants to pump water from old-fashioned pumps to propel their ducks through the racecourse.
There is also a cow train, tube slides, hayrides, a hay pile with slides built in and picnic tables scattered throughout the property for those who want to eat outdoors.
This long list of on-site amenities is more than enough to make the farm a destination location. But the ongoing events also draw large crowds from season to season, said Iverson.
“We have a beautiful garden filled with rhododendrons, since we used to have a stock block of those years ago. Many people rent the garden for weddings and parties,” she said. “We also have an Easter egg hunt here, a chicken barbecue and something we call ‘Wine Down’ where people can sample different wines.”
Some of the food-centered events require per-sample payment. Most of the activities there are accessible for a $10 fee for each carload of people. This parking price covers admission to the Wooden Shoe Tulip Farm whenever the farm is open to guests.
This additional income enables the owners to keep an entire field full of blooming tulips for guests to enjoy rather than cutting them for sale to customers. It is a necessary fee to offsets the costs, said Iverson.
Since advertising in the local paper worked so well in the beginning, the company continues to market this way today. Other mediums are also used to promote the business.
“We also do radio and print advertising, but much of our marketing efforts are directed at social media like Facebook and Pinterest,” said Iverson. “We do quite a bit of marketing through our website too, alerting customers of the varieties that are in bloom and any activities or events coming up here at the farm.”
Another creative concept employed there is a media outreach program. During the third week of March each year, a pack of tulips is delivered to each local television station with an open invitation to do a live or recorded broadcast from the farm.
This simple, but effective effort has resulted in annual on air coverage of the Wooden Shoe Tulip Farm’s business during peak season.
The Iversons hope to continue exploring new marketing options in the future in order to keep consumers up on the latest happenings at their family business.