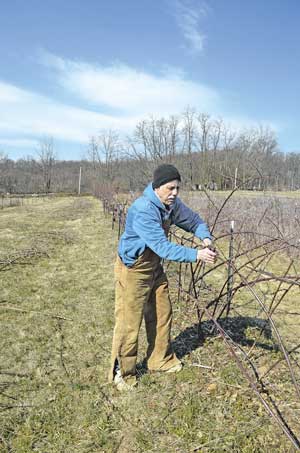 About 25 years ago, Robert Hamilton and his wife Eva started a Christmas tree farm, but after one year of growing trees, Robert decided that cutting down something he so carefully nurtured wasn’t for him. He and his wife Eva switched to fruit, specifically berries, and are doing it organically.

The original Hybridoma Organic Fruit Farm encompassed 32 acres in Baldwin, MD. The Hamiltons had an opportunity to purchase several surrounding farms and now have a total of 50 acres. The farm is under a Maryland Environmental Trust conservation easement that will protect the land from development. The farm was started with all organic production practices and is certified organic by the state of Maryland.

After removing the Christmas trees, Robert planted blueberries, which have become the primary crop. He later added blackberries, black raspberries and red raspberries, and also grows gooseberries and currants. The currants are popular among several ethnic groups. “The black currant is very bitter, but the Russians love it,” he said. Eva has established a section of the farm in lavender, which is popular among customers, and plans to add 90 more plants this season.

Blackberries also thrive on the farm, and Robert explains which varieties he prefers. “I don’t like Triple Crown as well as I like Chester,” he said. “Chester is a wonderful plant, with large berries.” He said the Triple Crown grows well but tends to put a lot of energy into leaves rather than berries.

Today, the blueberry section of the farm includes 6,000 plants, planted over several years, and Robert plans to increase that number. About 20 blueberry varieties are grown on the farm, including North Blue, Patriot, Jersey, Bluecrop, Elliott, Duke, Sierra, Berkley, Blueray, Coville, Late Blue, Earlyblue, Toro and Herbert. “The soil pH was a little high, so we plant blueberries with elemental sulfur to lower the pH,” said Robert. “Once the plant is in the ground, it’s the practices and what we put on the plant that’s critical.”

Robert said it’s challenging to fertilize blueberries properly. He uses pelletized chicken manure from the nearby Eastern Shore region as a fertilizer. “For the early varieties, the demand for nitrogen is so great early in the season,” he said. “The leaves are yellow and the plants don’t seem to be healthy, so I’ve put more late varieties in.” He said different blueberry varieties have different pruning needs, but the goal is always to open the plant to sunlight and air. “Once the plant is in, it’s there for 30 years,” he said. “We don’t use any pesticides or herbicides.”

As is the case with all organic production, Hybridoma Organic Fruit Farm struggles with insect and disease control. Robert is one of several growers working with the University of Maryland on a project to examine various pruning techniques and how those techniques impact the spotted wing drosophila (SWD). “The plants are marked and they have humidity and temperature monitors,” said Robert. “The researchers come out several times a year and prune in the spring.”

Despite the potential problems that come with the SWD, one of the biggest pest issues on the farm is Drexel’s datana (Datana drexelii) that feeds on blueberry leaves. “The moth lays its eggs underneath the leaves, and hundreds of worms start to crawl underneath,” said Robert. “Then they start eating the leaves. They go for blueberries and anything else that grows in acid soil. They consume all the leaves on the plant, and it kills the plant.” Robert said the best option for controlling the pest is to hand-pick them off the plants.

The other main pest issue is Japanese beetles, which Robert said runs in cycles, with some years worse than others. For managing this pest, he places a bucket of water under the plant, taps the plant and the beetles fall into the water.

Right now, Robert is working on pruning the brambles. He said it’s the ideal time of year because the canes are still pliable. He snips and cuts out dead wood, gently bending the tops of the young canes under the wire support. “It’s like creating a work of art,” he said, adding that it’s important to have attractively pruned rows when visitors come to the farm.

Robert shares some pruning tips, emphasizing the goal of opening up all areas of the plants to sunlight. “Remove the dead canes first,” he said, adding that pruning is therapeutic. “Then select the largest canes that are really healthy. I try to keep about three or four for each plant.” After the appropriate trimming, Robert gently bends each cane downward so any new growth will stay within the wire. “There’s no wrong way of doing it,” he said. “As long as you select healthy canes and prune at the point where the bud is coming toward you.” Once Robert is finished pruning black raspberries, he’ll start on blackberries.

Trickle irrigation is set up with a small, spring-fed pond as the water source.

Robert said he hasn’t had to use the irrigation for the last several years, but it’s in place for when it’s needed. Wood chips from a local tree trimmer are placed in piles that will degrade and be used as mulch. The farmscape includes a riparian buffer that includes 500 trees, all native to the state of Maryland.

When school children visit the farm, they get lessons in plant biology featuring the biological processes, chemistry lessons based on pheromones in the farm’s honeybees and physics lessons with the solar power. Robert likes to show students the practicality and science behind what they do.

Eva is a trained pastry chef and uses the fruit from the farm in her pies, tarts and other baked specialties. The Hamiltons started the farm with the intention of opening a U-pick, and Robert said that during summer, there will be 60 to 70 cars lined up along the lane with people who want to pick berries. He believes a more profitable angle will be selling organic fruit to CSAs, and he and Eva are also planning to host farm-to-table dinners.