Wreaths and memories made at Holly Farm 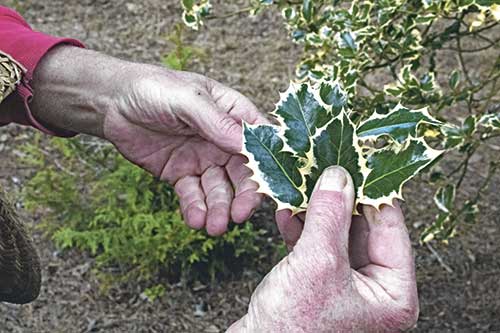 by Catie Joyce-Bulay
“I fell in love with this place and I told my parents I’m going to own it one day,” said Rob Henderson, owner of Henderson Holly Farm. He grew up working on his parent’s holly farm, also spending time at a neighboring orchard that he later bought and is now the business’ current location. The holly orchard, including some rare species, was planted by Virginia Morell and her husband in the 1950s. Morell was an avid amateur horticulturalist who later helped design Seattle’s Washington Park Arboretum, according to Henderson.
Holly thrives in the wet Pacific Northwest climate of Whidbey Island, about 30 miles north of Seattle. Henderson Holly Farm sits inland on the 51-mile-long island, just outside the town of Oak Harbor, where the site was selected for its micro-climate. At 360 feet in elevation, the farm is in the high point of a valley, where it is sheltered from salty coastal winds. This also allows for cooler winter temperatures and a warmer summer than its surroundings. It is this combination, coupled with the moisture of the foggy island, that the plants like.
The 10-acre orchard contains 800 trees in 11 different varieties, including crinkle, Rederly, firecracker, silvery variegated, golden king variegated, berry gold, Chinese weeping, oak leaf, porcupine, Teufel’s hybrid and Teufel’s delux.
There are two varieties of male trees in the orchard as well, which are easily identified by more flowers and a lack of berries. Because of this year’s dry summer, some of the male trees are beginning to flower again. “If those freeze off then there’s no flowers next spring,” said Henderson. “Then there’s no berries, so for them to freeze is the worst thing for us.”
Bud moth, specifically the tip leaf pearl moth, is another concern, he says. Because they lay their eggs in the spring, the trees are sprayed twice a year, once before flowering and once after. “If not, we either have to cut it out to work with the leaves, or the damage will continue to show for six leaves back on the stem.”
The berries begin to ripen in late September. “A few more chilly nights and they’ll really pop,” said Henderson. “When it gets down into the 30s.” Harvest begins in late November, during which time Henderson also prunes the trees.
The farm currently produces around 500 wreaths a year. Most are sold to island residents and visitors that come to select their own. They also ship around the country and work with florists. Henderson and his crew makes garland, holiday and wedding arrangements and corsages as well.
After harvesting, the stems are brought into the workshop where they are stripped and cleaned. “It takes 10 people. Somebody is stripping 100 stems, then someone else is placing 100 stems,” he said. All of the wreaths are handmade with foot-pump-operated tools and the garland is pieced together using a hand-crank machine.
“It doesn’t seem like it would be so labor intensive, but we take a lot of pride in our product. We target only the best pieces,” he said. In addition to the holly stems and berries, noble fir and cedar boughs are used, which are gathered on the farm’s other 14 acres.
Henderson builds the wooden frames, snowmen, deer, birdhouses and other creations used to showcase the holly arrangements. Henderson initially created the farm’s signature knee-high wooden deer as display pieces to accompany their roadside sign to attract visitors. When people came to the farm, they wanted to buy the deer as well. The snowmen started out as a special request. “We’re only limited by our own imagination as to what we can put together,” he said. A small wooden moose sits on the window sill, a prototype for a larger moose a customer requested.
The orchard is a festive place during the season, which begins a few days before Thanksgiving and ends the day before Christmas. Families in Christmas sweaters and professional photographers populate the rows of trees, posing for holiday cards. “We really keep this place like a park. We’re mowing from May to September,” Henderson said. “Half the time during the season our crew is looking out the window at everybody all dressed up.”
Visitors are encouraged to come into the workshop to watch their wreaths being made. “We get them to see what we see to get the product right, but also to see the joy in the eyes of the workers when somebody comes up and buys it right out of their hand after they just made it,” said Henderson. They employ eight seasonal workers, mostly locals who come back year after year. “They get the same look in their eyes that the little kids do and you see the self-confidence and the glow. I call it the magic of the shop.”
Although magic doesn’t make the wreaths; a lot of hard work goes into the meticulously crafted wreaths. “It gets faster than McDonalds out here,” Henderson said. “Sometimes we get joking and ask, ‘Do you want Pepsi and fries with that?’ Because it’s 30 days of pulling our hair out,” he said, pointing to his bald head.
There’s always time to stop and take a photo if anyone that wants it. Another popular photo op is right outside the shop, where visitors pop their heads into a giant wreath beside the farm’s sign. “I tell everybody from the crew, if anybody’s out there and they need their picture taken you take it for them.”
A visit to the farm is a holiday tradition for many and families with children often tell Henderson that their parents brought them to the farm when they were little.