You know it’s American-grown when you pick your own 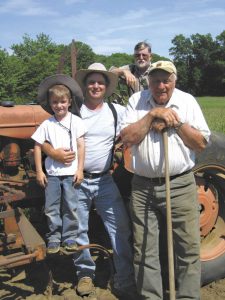 by Kristen M. Castrataro
What do you do when your available farmland decreases by 70 percent in one year, and the remaining 30 percent is half woodlands or stone fields? If you’re Jay, Darlene, Justin and Amy Dame in Johnston, RI, you turn to pick-your-own.
Ancestors of the Dame family, the Browns, have lived on the current farm since the 1840s. At that time, the farm had a few cows but primarily sustained itself as a market garden farm selling to local Mom and Pop stores.
In the early 1890’s, “Granny” Brown married Don Dame, and the farm became known as Dame Farm. Don had a plan to grow peas, but after a year picking rocks and never seeming to get ahead, he gave up. In the 20s, the “boney” soil was planted to apples, and the remaining workable land was used for hay and sweet corn.
In those years, Dame Farm encompassed over 120 acres. Forty acres went with “Granny’s place,” the remainder adjoined it and was home to a dairy farm. The dairy paid the bills. Granny’s place alternated between a starter home for the generation coming along and interim residence for neighbors who needed a place to stay.
In 1968, the “home farm” with the dairy and most of the tillable land was part of a land acquisition designed to create a state park. Dame Brothers, as the business was then known, folded. Don had died, and his estate was being settled around the same time. One brother left to dairy in Vermont. Another had already moved south.
The farmland was divided among the remaining three brothers. One farm was sold to a developer, the other was eventually sold out of the family. Only Granny’s place remained.
As history would have it, the Dames were able to negotiate a rental agreement with the State of Rhode Island for the home farm. From 1972 to 2012, members of the Dame family rented the land to grow sweet corn, hay/straw and mixed vegetables that they primarily sold through their farm stand. In 2012, the Dames and the State of Rhode Island experienced irreconcilable differences regarding a renewal of the lease.
For the first time in over a century, the Dames were neither living on nor working the home farm. Instead of working 120 acres, they were suddenly limited to the 40 acres around Granny’s place. The farm was providing for three families and four generations: Patriarch Jim and his wife Marcia, son Jay and his wife Darlene, and grandson Justin, his wife Amy, and their four children. Their business model had to change fast.
Granny’s place had 17 cleared acres and eight acres planted to peaches, apples and blueberries. They converted the buildings to a farm stand, office and storage facility. To maximize existing resources, they decided to put most of their effort into expanding their multi-crop U-Pick business. To help keep their farm stand customers, they grew vegetables and bought in sweet corn.
Fall was the real heart of the year, though. U-pick apples and pumpkins, wagon rides, a family-friendly corn maze, and the “Bushel Basket Deal” where you fill a bushel basket as high as you can with pumpkins, gourds and winter squash for a set price. The Dame Farm and Orchards became a place “where a family can come and have a good day and take home some quality produce,” says Justin Dame.
Only four years into the transition, the Dames experienced one of the largest weather-related crop failure in their history. This year they lost 100 percent of their peach crop and about 70 percent of the apple crop. The blueberries are a bright spot, “come for blueberries,” Jay jokes.
The expected loss of income prompted some creative thinking. This spring, the Dame’s opened “Sunflower Stroll,” which is paths traversing a three-acre sunflower field and featuring a U-pick sunflower component. The flowers, which will only have about a 10-day harvest window, bloom concurrent with the blueberry harvest. Once the flowers go by, the field is replanted to the annual corn maze.
Agritourism, primarily in the form of school/corporate tours and wagon rides, has played an increasing role in the farm’s business plan. Justin identifies the draw: “Our biggest commodity is the view, not what we grow on it.” Jay adds, “We work hard to make the place aesthetically pleasing.”
To capitalize on the natural beauty, the Dames have designed a new wagon ride route that runs along the “elevated ledges” and offers a scenic overlook of the entire farm, orchards and ponds. They are also installing a small butterfly garden.
The butterfly garden will be attractive for people and pollinators alike, but it also serves as the site of a butterfly release during the Third Annual Harry’s Harvest Memorial Celebration and Family Fun Day. Organized in memory of Harry Eva, Darlene’s brother who succumbed to cancer, the fundraiser will benefit Harry’s widow and children as well as a charity to be determined by his children.
The butterfly may actually be an apt image for this family and this farm, who for generations have transformed themselves and their business in response to changing conditions and opportunities.